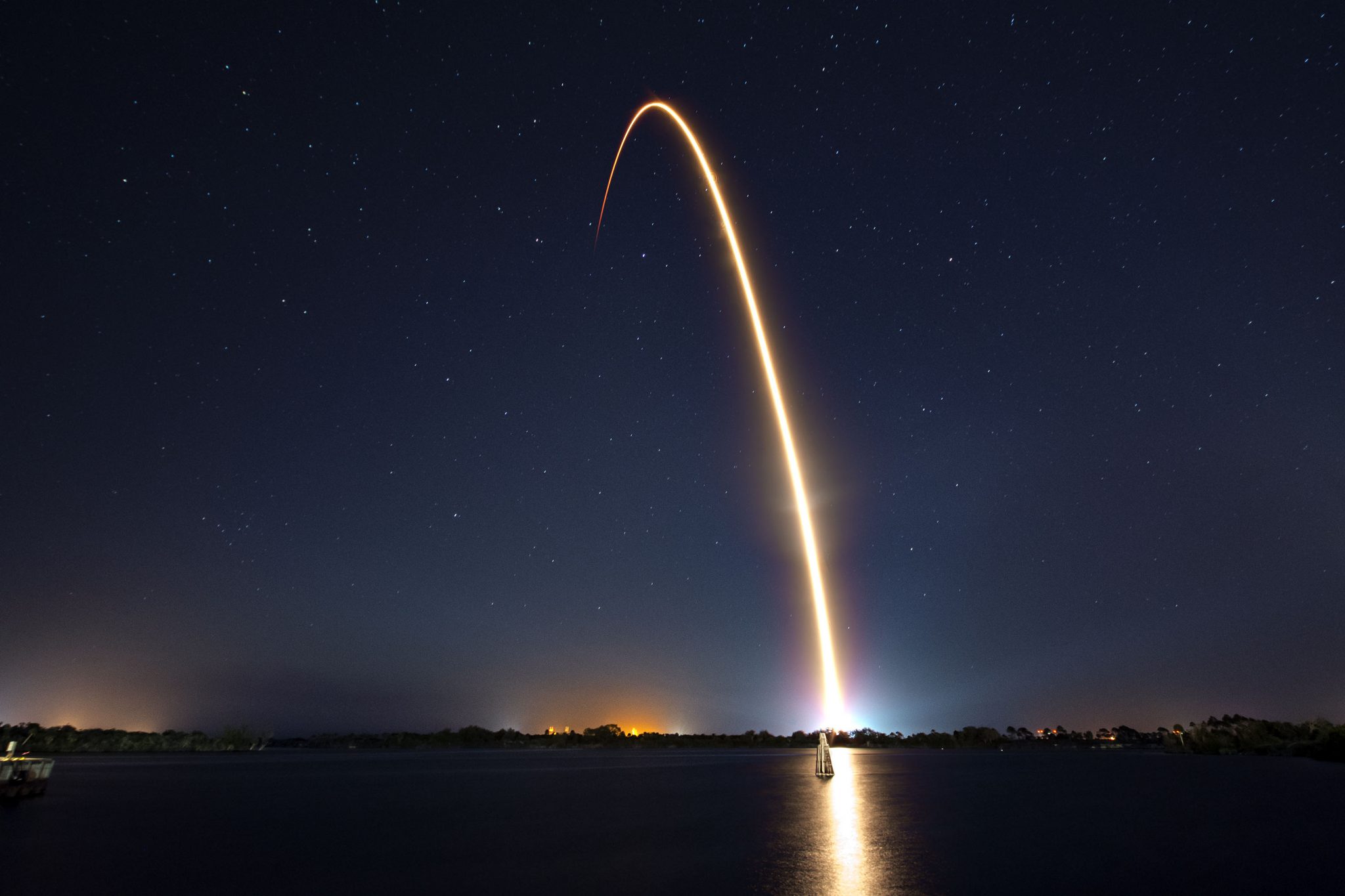 Are We On Pace to Reach the 2030 Goal of Ending Extreme Poverty?

On the table rested a newspaper clipping.  The article announced that the SpaceX Crew Dragon 2 would launch at 2:49 am that night.  A handwritten note said, “walk out to the beach and turn left.”

I set my alarm for 2:30 am.  When it went off, I put on my flip flops, walked out to the beach and turned left.  At first, I didn’t see much except the dark outlines of other people sitting or standing on the beach while lightning forked its way through cloud formations to the east.

A few minutes later a cheer went up from those gathered on the sand as we started to see an orange glow on the ground about ten miles north at the Kennedy Space Center.  In a few seconds the glow began moving straight up into the night sky.  After about two and a half minutes, with the light high overhead, we began to see a second burst of flame above the first as the first stage rocket fell away and the second stage took over.

Our eyes followed that new light for a few more minutes as it bent around to the east and shrunk in size until we could no longer see it.  I turned around, walked off the beach, and went back into our apartment to go back to sleep.

Our family joined together at the end of last week in Cocoa Beach, Florida to celebrate the birthdays of our daughter and granddaughter.  It wasn’t until we arrived, and I saw the clipping on the table, that I realized we had arrived just in time to see an historic launch from the Kennedy Space Center.

Intrigued by my far-away view of a rocket propelled into space, I read up more about the mission of the latest SpaceX rocket and all that took place as I was watching a fireball trace its way across the sky.

This was SpaceX’s 26th mission, and the first one for its new model rocket, the Crew Dragon.  A modification of the Cargo Dragon, this ship is designed to carry humans into space.  This flight had a human dummy on board, loaded with monitors (the team at SpaceX named the dummy Ripley, after the Sigourney Weaver character in Aliens).  If the flight is successful, and the monitors show it is safe for humans, then SpaceX will fly astronauts to the International Space Station (ISS), perhaps as early as July.

At the time I reached the beach last Friday night, the combined SpaceX and NASA team had loaded the rocket with its combustible combination of fuels, rocket grade kerosene and liquid oxygen.  When the countdown ended, the fuel in the first stage began to mix, creating an explosion in the nine rocket engines contained in the first stage, slowly lifting the rocket off the launch pad.

The first stage of the rocket engine takes on the hardest task, getting the rocket off the ground and moving it through the densest part of the earth’s atmosphere.  In slightly more than two and a half minutes its nine Merlin engines provide over 1.7 million pounds of thrust to carry the ship 80 miles into the air.  At this point the first stage falls away and the second stage takes over in much thinner air.  Its one engine fires for six and a half minutes, providing 210,000 pounds of thrust and propelling the ship another 320 miles in altitude while guiding it into an orbit that matches that of the ISS.  The second stage then falls away, and the thrusters on the capsule take over, guiding the ship to dock with the space station, successfully linking the two ships while they both travel at 17,150 miles an hour.

Meanwhile, as the first stage falls back to earth it uses its remaining fuel to fire its rockets and slow its descent.  Fins on the outside of the stage move to guide it to a barge floating in the Atlantic, 500 kilometers east of Cape Canaveral.  As the stage came close to the barge, its thrusters fired to slow it enough to make a soft landing on the barge, inside the target circle painted on the barge surface.  The barge, named “Of Course I Still Love You,” welcomed the expended engine back to earth and floated it back to Port Canaveral so it can be used again in a future launch.

Up in the Space Station, three astronauts opened the latch on the Crew Dragon and matched the atmospheres in the two ships.  They took out the 400 pounds of supplies that Crew Dragon had carried up, replacing it with 300 pounds of finished experiments and trash to be carted back to earth.  After spending four days attached to the ISS, Crew Dragon 2 disconnected, using its thrusters to slow its speed and direct it on a course back to earth.  Glowing red with heat, the ship re-entered the earth’s atmosphere.  A few minutes later it deployed one set of parachutes to slow its descent, then another to float it slowly into the Atlantic Ocean, where another barge waited to pick it up and bring it back to port.

The more I thought about the rocket launch, the more I saw parallels with the challenge faced by parents trying to launch their families out of ultra-poverty.  You may think this sounds like a stretched analogy, but hear me out and see what you think.

Similar to the earth, poverty has its own gravitational pull.  Escaping poverty requires a concentrated and focused effort, much like the thrust of engines pushing a rocket away from the earth.  A rocket will spend most of its fuel in lifting off and covering the first few miles into space.  Moving out of ultra-poverty requires a similar big push, with the most resources required for the first few steps.

Propelling a rocket into space requires an intricate combination of fuels, material, software and guidance.  The fuel needs to generate a controlled explosion.  The container needs to hold this explosion without blowing up.  Sophisticated software, tied to precisely engineered moving parts, guides the rocket to its exact location.

In a similar way, escaping ultra-poverty requires a well-integrated sequence of inputs.  Those who live in ultra-poverty suffer deficits in assets, education, nutrition, healthcare and housing.  The considerable skills they have developed to stay alive despite the poverty they suffer are not the same skills they will need to manage a range of assets that supports their ongoing livelihood.  If they receive support in only one or two of these areas, they will find their journey out of poverty constrained by the other deficits they face.  Scientific studies have shown, though, that 90% do make complete their journey out if they have the right combination of inputs at the right time.

Those launching rockets seek to achieve escape velocity, achieving a speed where the rocket can either maintain an orbit around the earth or move completely out of the earth’s atmosphere and continue into space.  Those moving out of the gravitational pull of poverty must also reach a level where they can maintain their escape, where they have enough resources and skill to continue the journey on their own.  Without sufficient resources they fall back into poverty.  On the other hand, with access to the right combination of resources and support, even the most impoverished people have proven their ability to sustain the trajectory they started on.

Big Investments to Accomplish the Impossible

The US has supported space exploration with over $600 billion since NASA started in 1958.  Combine that with the resources other countries have put into their own space programs, and the global community has invested well over $1 trillion into discovering more about the universe we live in.

Helping all those who live in ultra-poverty to achieve self-sustainability will require a similar large investment.  With an estimated 400 million people living in these conditions, and an average cost of $1,200 to launch each person out, it will cost almost $500 billion to eliminate ultra-poverty.

While sending rockets into space is incredibly expensive, the cost per mission have been coming down.  SpaceX has found innovative ways to reduce costs, such as using 3-D printers to build the first stage engines and reusing the first stage container.  In the same way, the cost per family moving out of poverty will come down with experience and improvements in methods.

The global community has proven that it has the resources and the will to take on huge projects, costing hundreds of billions of dollars, that many had thought were impossible.  The question for us now is: What is the best legacy for us to give to future generations — landing people on the moon and vehicles on other planets, or eradicating extreme poverty on our home planet?