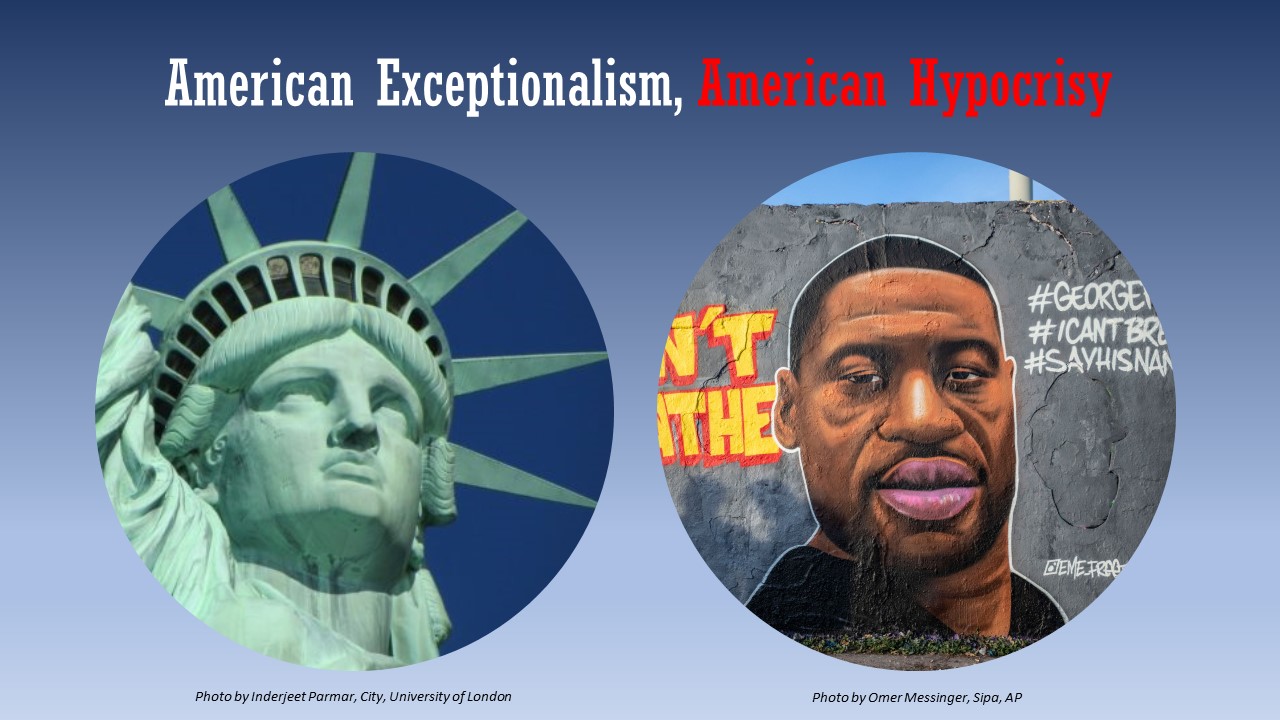 I was on a call with friends in China the other day, and they asked me about all that has been going on in the US.  On another call a friend in Paraguay asked me, “Where does all this anger in your country come from?” They couldn’t understand how a culture that had done so much to promote science and engineering could be failing so miserably in its response to the coronavirus.  They also couldn’t understand how a nation built on the concepts of freedom and equality could still be treating people of color so poorly.

Here’s my attempt at explaining the current state of America to those in other countries who can’t understand what is going on here.

America the brand stands for freedom and equality.  The reality is that the people who wrote that “All men are created equal” as the defining slogan of the country had no problem with owning other human beings.  Forty-one of the 56 men who signed our Declaration of Independence owned slaves.  Some of the others were strong opponents of slavery but were willing to compromise with slave owners in order to secure their own freedom.  They all saw the injustices visited on them by the King of England, including the injustice of taxation without representation, as more important than the injustices that they were inflicting on fellow humans in their own country.

America the brand also stands for human rights.  At our best we have stood up for the rights of oppressed people in other countries.  The reality is that our relationships with other countries more often follow our economic interests, and sometimes we use human rights as a fig leaf to cover our financial agenda.

America the brand stands for democracy, the ability of the people to govern themselves.  The reality is that we have allowed money to dominate our politics and control our government.  And when both major parties can raise similar amounts of money, our national government comes to a standstill.

America the brand stands for upward mobility – anyone who studies hard and works hard can become wealthy.  The reality is that, over the last 40 years, we have seen growing inequality in our country.  Those with wealth and power have captured all the gains when our economy has grown and insulated themselves from losses when the economy contracts.

America the brand stands for innovation and invention.  We believe that freedom allows people to invent solutions to the challenges that people face, and in the process create jobs and wealth that cascades through the economy.  The reality is that inequities in wealth and education lead to innovation that focuses primarily on the needs of the privileged.

America the brand stands for scientific advancement.  Our native-born and foreign-born scientists have helped fight disease and create new technologies.  The reality today is that science has become a victim of the culture wars, with many filtering science through the lens of politics, choosing only to advance facts that benefit their party and finances.  As a result, we lead the world in coronavirus deaths, and we hold the world back from taking meaningful steps to address the looming disasters from climate change.

America the brand stands for freedom of expression and the right to protest when rights are violated.  The reality is that some protests face no resistance, while protests that challenge the ruling class are met with state-sanctioned violence.

America the brand stands for equality of opportunity.  The reality is that wealthy white straight males have always had much greater opportunity than any other group in our country. Many in that group are frightened at the prospect of losing some of their advantages.

When you hear us talk about “American exceptionalism,” we are talking about the brand.  We have an exceptional brand that we have worked hard to promote to the rest of the world.  But when you look at the reality, what you see is divisions by race, class, wealth, and power.  Which means we look much like any other country.

The anger you see on our streets today comes from the growing divergence between the brand and reality, and the ability of social media to display that contrast several times a day in our news feeds.  We believe the brand, but we see it slipping out of our grasp, becoming a product that only the very wealthy can afford.  We fight over the scraps left behind, groups attacking each other to retain whatever opportunity and privilege remains, rather than fighting together to make the system match the promise.

A good brand becomes a self-fulfilling prophecy, its ideals so clear that any failure to deliver on them becomes obvious and demands correction.  The history of the American experiment has been a slow and arduous battle of self-correction.  It took us 100 years to end slavery, and another 100 years to codify civil rights into law.   And today, 60 years after that upheaval, we are again on the streets trying to make sure those laws get enforced in an equal way.

As I look at their example during our celebration of independence, I need to look at my own life.  Where am I doing the same things?  What rights do I demand for myself but don’t give to others?  What injustices am I acutely aware of when they happen to me and my friends, but ignore when they happen to others?

Our nation’s image has come from great branding.  Lately, that brand has become tarnished as it has become obvious to us and the world that our reality has moved farther and farther away from the promises of the brand.

If we continue in this direction, our brand will lose all its value.  On the other hand, we can use this moment to make sure all of us can share in the brand’s promises.  We can learn that when any part of our country does not share in the benefits of freedom and opportunity, we all become worse off.

Maybe then the stories you see about America will more closely match the image we try to project through our brand.

An Update from Equitas Bank