From Starving to Thriving for $300

How Could They? How could one human being own another and think it was right?  How could thousands of plantation owners in the South think that they had the right to put millions of slaves to work without paying them?  How could a slave owner sell children away from their parents and wives away from their husbands, and then go to church to worship the God who created us all? Looking back from this vantage point, two hundred years later, it’s hard to believe that human beings could ever treat other human beings that way.  But the fact that our ancestors did so teaches us some hard lessons about how easily morals can be compromised when they clash with our net worth, and how difficult it can be for values to stand against the torrent of capitalism.

And what about us, living today? What are the things that we do without thinking about it that future generations will find deplorable? At the end of this review I'm going to ask for your answers to this question, so keep that in mind as you read through.

Edward Baptist’s carefully researched and horrifying book, The Half Has Never Been Told, provides this cautionary tale from the first two hundred years of US history.  Baptist spent 12 years writing this book, cataloging the stories of ex-slaves told to writers working for the WPA in the 1930s, and cross-referencing these with the records of slave sales across the South.  As a result, Baptist has produced a history of the antebellum era unique in two respects.  First, it tells the story of a slavery from the perspective of the slaves themselves, using their stories to show how imprisonment, kidnapping and forced labor affected them.  Second, his book, more than any other that I have read about this historical period, goes deep into the actual economics of slavery and how it affected the growing wealth and power of the United States. One of the clear implications that two centuries of slavery teaches us – when moral values collide with economic interests, economic interests usually win.  Take, for example, a man sensitive enough to the dignity of all people to be able to pen the words that form the national ideal of the United States, “All men are created equal, and are endowed by their Creator with certain inalienable rights, among which are life, liberty and the pursuit of happiness.”  Yet, when Thomas Jefferson rode home from the Continental Congress he returned to a farm where almost 200 slaves did the work.  Jefferson would struggle with this moral dilemma all his life, but his interests in science, wine and travel required an income to support, and slaves supplied that income.  Even at this death, Jefferson did not free his slaves, as Washington did, because he was in so much debt that his heirs had to sell the slaves to pay his creditors. 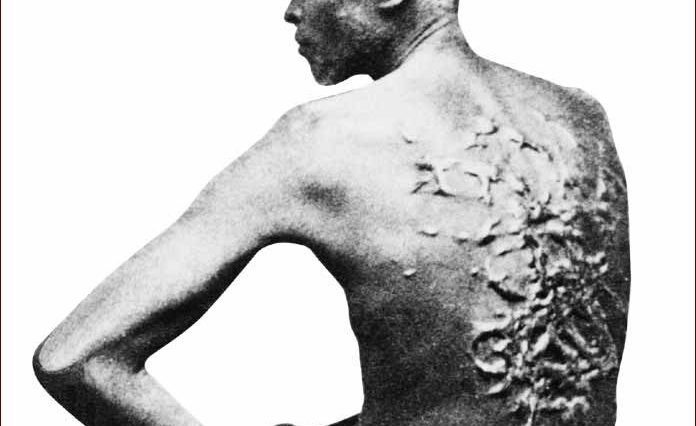 Productivity from Torture Baptist chronicles how treating people as property led to ever more inhumane treatment as plantation owners worked to maximize the returns from their investment in human bodies.  As our nation grew and acquired more territory, the demand for slave labor also grew.  Plantation owners found they could earn a lot of money by selling their slaves to people establishing new farms on the other side of the Alleghenies.    The trouble they encountered, though, was how to transport humans hundreds of miles without them running away.  Hiring all the security needed to keep the slaves together would erode their profits.  They resorted to an ancient form used for transporting livestock – the coffle.  Hundreds of men, with chains linked through iron collars on their necks and cuffs around their wrists, followed by scores of women and children with ropes tied around their waists, and one white supervisor on horseback herding them along.  This group would march, in step, from Virginia and the Carolinas as far as the Ohio River.  They remained chained together the whole time, eating together, sleeping together, defecating together. In the new southern states formed out of the Louisiana Purchase, slave owners developed new management techniques to increase the productivity of their slaves.  Seeding and weeding lines allowed overseers to make every slave keep pace.  They would set the slave most efficient at planting or hoeing at the beginning of a row of slaves.  Everyone in the row had to keep pace with that person.  If they fell behind, the overseer could easily see them lagging behind the row.  He would ride over to them, whip raised, and lash them until they caught up.  At harvest time, the overseers used a different technique, the quota system.  The first day of harvesting, a slave would go out and pick as much as he or she could.  That became their base quota.  The slave had to maintain that quota every day, and every week or so the overseer would raise the quota.  At the end of every day of harvesting came a weighing.  Anyone who failed to meet their quota got whipped.  Baptist gives evidence to show how the average production of a slave, in the 100 years from 1760 to 1860, increased over ten times.  He also gives the reason for the increased production – more effective uses of torture. 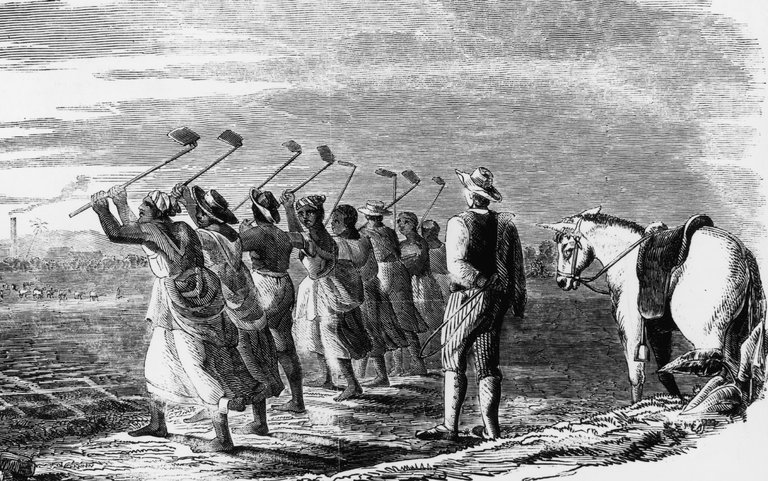 Building a New Financial System and a New Empire Cotton produced by slaves provided a low cost raw material for making textiles.  This brought the price of clothing down to a level that produced huge demand around the world.  English textile mill owners purchased all the cotton they could from the southern states, but still could not meet the demand.  Banks in New York, Philadelphia and Washington, D.C. financed the purchasing of land and slaves needed to grow the cotton for export.  When regular forms of financing could not keep up, investors in England came up with new ways to help plantations in the South to produce more cotton.  Since slaves had a value in the open market, they began providing loans against the value of the slaves a cotton producer owned.  Cotton producers would use the money they received form these loans to go out and by more slaves and borrow more money against their value.  In England, financiers bundled these loans together and sold them to investors in England, Europe and the US.  Thus, the first mortgage backed securities came not from financing the purchase of house, but to finance the purchases of human bodies.  Of course, all this financial frenzy produced a bubble that eventually burst when plantations produced more cotton that the market could bear, leading to a plunge in the price of cotton and of slaves.  It took several years for the market to correct, but soon it was racing ahead once again as Northern towns began setting up their own textile mills. This industry drove world trade, economic development and the growing wealth and power of the United States.  By the 1850s, cotton made up half of all the exports from the US.  The value of slaves in the South exceeded the value of all the factories in the North. The growing textile business helped generate the Industrial Revolution as mill owners sought out better machines and improved labor management.  It helped build our modern financial system, as some of our largest banks today grew their initial wealth and geographic reach by financing the sale of slaves.  International trade expanded and economic theories about comparative advantage developed from this trade.  Almost all people benefited from this rapidly growing industry.  Land owners saw their assets and income increase.  Transportation businesses received additional income, as did the Northern producers of plows and hoes.  Textile mill owners and textile sellers built their businesses.  Investors in England, Europe and the US received increased returns.  People with modest incomes gained from being able to purchase less expensive and higher quality clothing. Everyone benefited from this booming trade in cotton and textiles, or at least everyone with lighter hued skin.  The people whose labor produced the cotton that drove the whole industry received nothing.

Some economists like to say that capitalism leads to freedom and markets build morality.  Our history as a nation shows that the opposite can also be true. Our capitalist system was built on the backs of those who were not free, and the growing markets for cotton and slaves pushed people to expand the area where people could be enslaved as widely as possible.  The market could not stop the expansion of slavery.  That only came after four years of war and the loss of 600,000 lives.

How Can We? While reading the book, I often had to put it down for a while as the magnitude of the abuse, violence and torture some of my forefathers inflicted on others washed over me.  But while I rested from reading, a nagging question kept bothering me.  Today we look at those who owned slaves, and those who profited from their labor, and we ask, “How could they?”  What kept bothering me was thinking about future generations.  When they look back at this time, what will they shake their heads at and say, “How could they?” It’s not like people living in the 1800s did not have the moral tools to see slavery as wrong.  By that time, England and most of Europe has abolished slavery, yet these countries still participated in the selling of slaves to America and the purchasing of products that came from slave labor.  Some church groups in the US denounced slavery, but the vast majority of churches, especially those in the South, proclaimed slavery to be God’s will.   Some Northern textile manufacturers refused to work with cotton grown by slaves, yet most manufacturers knew that slaves produced their cotton and bought it anyway.  In the face of the economic gain to be earned from the work of slaves, the call of morality had little sway.  Growing wealth dulled our forefathers’ ability to sense moral unrest. Which makes me wonder, in what ways today are we acting like the slave holders of the past?  Where does our economic gain eclipse our values?  Where are markets overwhelming morals? I think future generations will look at the ways we treat our environment and be appalled.  They will say, “For thousands of years before you, people knew how to take care of this world.  What happened to you?  Why did you think you could squander our environmental inheritance on yourselves?” I think future generations will also look at some of the conditions that people work in who produce the raw materials and assemble our phones and clothes and say, “You had so much wealth.  Why did you need to get such a cheap price on your purchases that the people who put them together for you could not earn a livable wage?” And, it we do not get ourselves organized to end extreme poverty around the world in our lifetimes, I think future generations will ask, “With all the wealth you generated, why didn’t you make sure that everyone had enough for their basic needs?” Your Thoughts What about you?  What do you think future generation will find appalling about the way we live and produce income today?  When they learn the history of our era, what will they look back on and say, “How could they?”