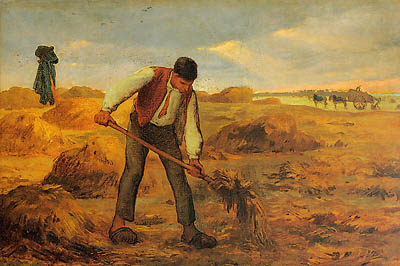 The divine messenger appeared to the peasant farmer. “The Almighty has decided to bless you, hard-working farmer. Whatever you wish for will be granted.”

“Only one small condition,” the messenger continued. “Whatever you wish for, your neighbor will be granted double.”

The farmer’s smile disappeared. “So if I ask for a ton of gold, my neighbor will get two?”

“You understand well the conditions of the Almighty.”

The farmer thought in silence for a while. Suddenly, his face brightened. “I’ve got it. Put out my left eye.”

I heard this gruesome joke several times when I traveled in Russia after the fall of the Berlin Wall. It is one of the best summaries of scarcity thinking I have ever heard. Rather than see his neighbor benefit more than him, the farmer chooses injury. Underlying this farmer’s choice is his fundamental belief about how the world operates — that the world contains a limited amount of good things and every benefit his neighbor receives will mean fewer benefits available to him.

(The fact that there’s a farmer in the story does not mean I think that this type of thinking is endemic to farmers. That’s just the way I first heard the joke. Feel free to put any profession you want in the place of farmers, such as Senate Majority Leader.)

As America celebrates its independence this weekend, I thought about this story as I read the news of the day. So much of our national discussion today seems to be based on the same sort of thinking as the farmer in the story. Our political leaders seem more interested in preventing good things from happening for the other party than in providing good things for the American people. In issues of race, immigration and trade we seem to be more interesting in preventing good from occurring to others, thinking that that will lead more good available to us.

The opposite of scarcity mentality is a belief in abundance, trusting that, as people work together, they can create more and more good things. When America has been at its best it has demonstrated this belief in abundance. Trusting that recognizing that every person has the same rights could lead to a nation that creates growing possibilities for all its citizens. Investing in the development of its defeated enemies to prevent future wars. Sharing its technology and knowledge with the world to generate more invention and production.

On the other hand, when America has been at its worst it has operated from a scarcity mentality. Enslaving an entire race in order to produce profits for a few. Taking land from others to enrich ourselves. Putting children in prisons, denying them access to their parents and basic human rights, in order to scare people away from our border.

A scarcity mentality ultimately becomes a self-fulfilling prophecy. The pie gets smaller as we keep cutting away pieces to prevent others from eating them. An abundance mentality can lead to lead to an expanding pie, as more and more people add their own ingredients to the mix.

This Independence Day I want to focus on the blessings I enjoy because people before me believed in abundance and found ways to work together to improve the lives of many. I also want to see what I can to to overcome the fear and hatred I see in our country that comes from believing that any good that happens to others is something stolen from me.