June 26, 2018
What’s one of the hardest parts of reaching and serving people living in ultra-poverty?  Finding the right people to help.  You have a service designed for those who need it most, but the people who line up to get it are the people who are better off and have more influence.  Meanwhile, the people who do live in ultra-poverty try their best to stay hidden.  Life experience has taught them that exposure often leads to more suffering and exploitation.

BRAC, the Bangladeshi organization that pioneered the graduation approach for dealing with ultra-poverty, has developed a belt and suspenders way of finding the right people.  They start with a village meeting that includes everyone, rich and poor.  Then they follow it up with a survey in people’s homes.  Then another survey a day later to make sure they didn’t miss anything.  It’s one of the reasons (among many) that BRAC was selected as the world’s best nongovernmental organization (NGO) for the past three years in a row.

I’ll let Mahmuda explain it to you.  She lives in central Bangladesh and was selected two years ago to participate in the Ultra Poor program. 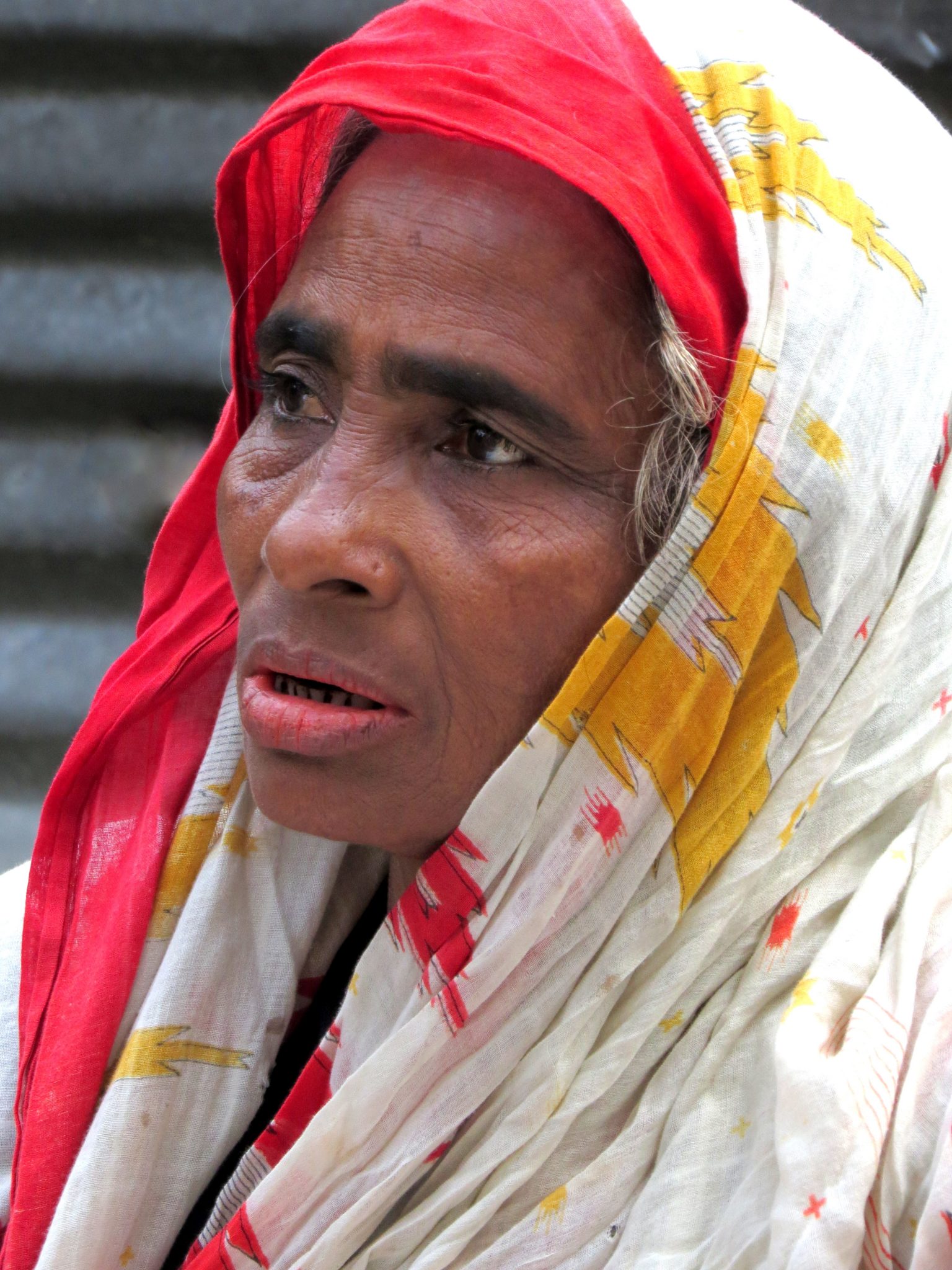 “Everyone was talking about the meeting.  I wasn’t going to go.  When they ask people in the village to come to a meeting, they don’t mean people like me.  They want the big people, people with money or jobs with the government.  And if I went I know they would ask me to clean up after them.

“But then someone from BRAC came right to my bari (a family compound made up of a collection of huts).  I was surprised.  Outsiders never come here.  She sounded important, and she asked me to come to the meeting.  I told her she must have made a mistake.  I never went to school.  Why would they want me to come?  She said that I would be one of the most important people there.

“I didn’t really believe her, so I asked my neighbors what they thought.  We were all scared to go, but since the lady had been so nice and came to our homes to ask us, we decided we would go together as a group.

“When we arrived at the meeting place, I was surprised.  Everyone was meeting under a tree.  No special seats for the big people and the strong people and the rich people. I felt shy.  The other women had such nice and bright saris.  Me and my friends wore the only saris we have.  We put our heads down and went to the back, on the women’s side.  I didn’t know many of the other people.  They never had invited me to weddings or celebrations.  They knew I was too poor to bring a gift. 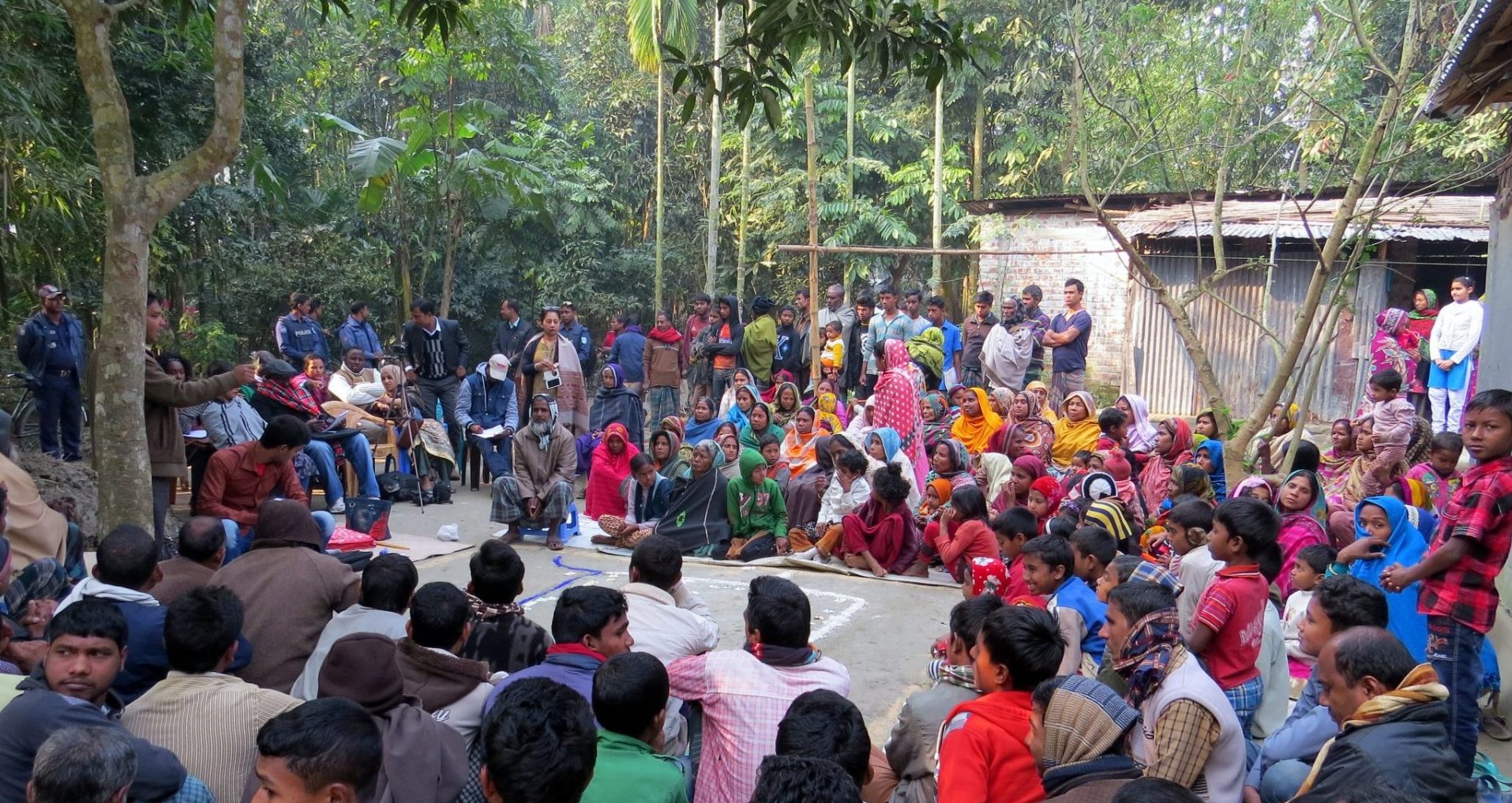 “A woman got up to talk.  I didn’t understand everything she said, but she talked about them wanting to know more about poor people in our village. Then a man started talking and pointing to a drawing on the ground.  He put some small pieces of paper down and said one was the mosque and one was the government building.  He said the lines next to the pieces of paper were roads.  It took me a while, but I saw that he had drawn a small picture of our village.  He asked us to help him, and we helped him put down a piece of paper for every building and hut in the village, even the small huts like mine.

"Then he pointed to each home on the drawing and asked who lived there and what they did for work.  He wrote the answers down on a piece of paper, one paper for each home.  After he got through all the homes, then he went through all the pieces of paper, asking us about who was rich and who was poor.  He put the papers into five piles.  On one side was the richest.  On the other side was the poorest, with three piles in between.

“I was in the last pile, the poorest. I was scared when he started asking people about me, afraid of what they would say. I thought they didn’t know me. But they did, and they knew about my struggles and how poor I was. 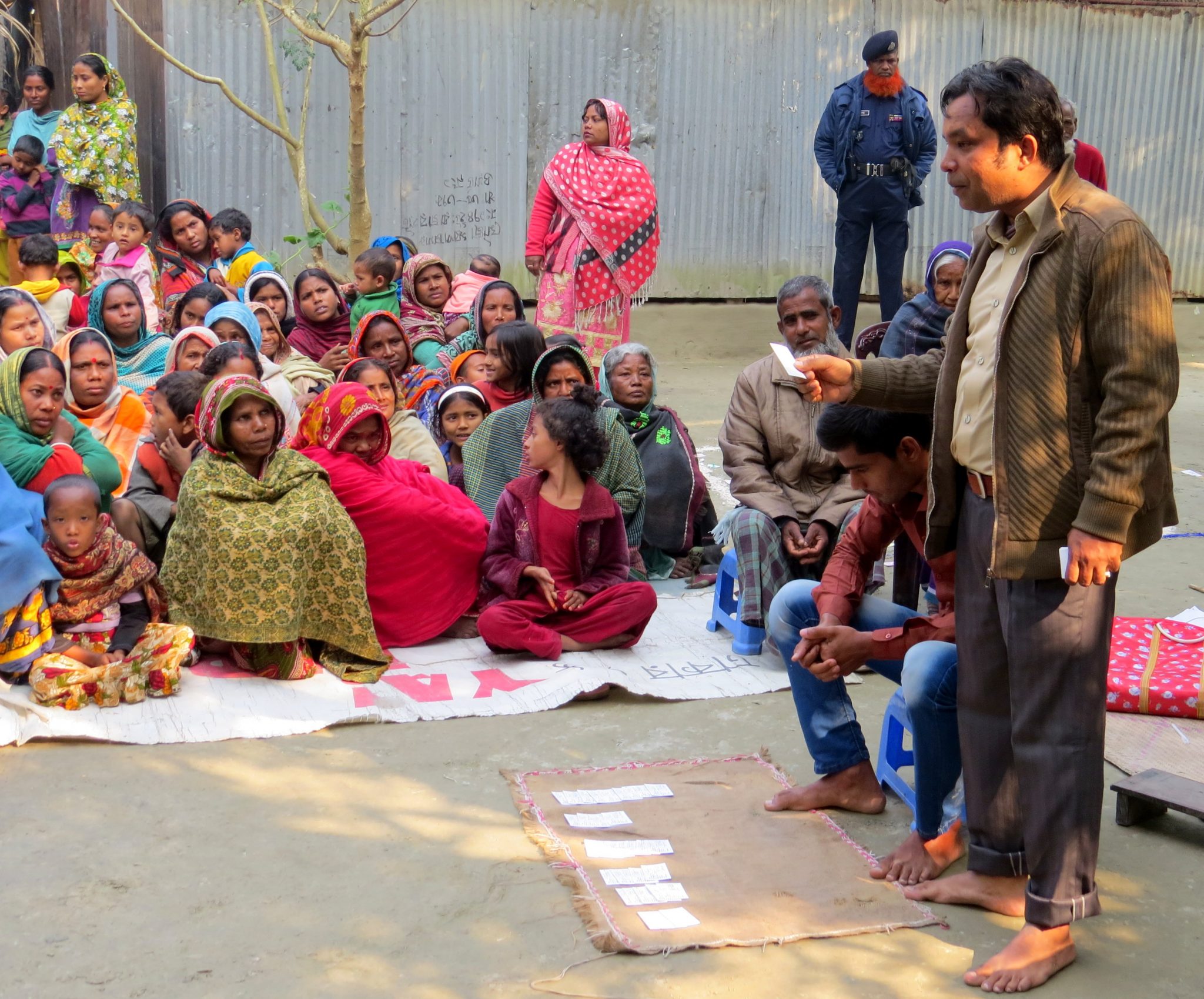 “The next day two people from BRAC came to my bari and asked me a lot of questions.  They asked about when I was a child.  I told them that I never went to school.  My mother needed me to help her with her work as a bamboo weaver.  I would strip the bamboo into pieces and she would weave it into mats, or rugs, or walls for inside the hut.  I learned to weave by watching her, and when I was older I got to make things too.

“They asked about my marriage.  I told them that I got married at the usual time.  It was about the time when the girls who went to school finished their first level.  I was 12.  My husband was ten years older.

“My parents could not pay much for dowry, so the husband they arranged for me came from a very poor family.  So poor that they did not have any space for us to live.  I felt bad for him when we had to come back to my family’s bari to live.  A couple of years later we had a daughter.  When she was born I made a promise that she would have a better life than me, that I would make sure she could go to school as long as she wanted.

“My husband worked as a healer, the person people would go to him when they were sick and could not pay a doctor.  They could not pay him much.  If we were lucky they gave him a chick or some eggs.

“I continued to weave bamboo, but I could only work when people could bring the bamboo and tell me what they wanted me to make.  During the time of planting, growing and harvesting the rice, my neighbors would have work on other people’s land.  They could afford to pay me to make things for them.

In the months in between no one had much money. We would often go days without food.  We were not happy then.  My husband and I used to fight a lot.


“Then my husband died of a heart attack.  It was just me and my daughter.  I continued to work hard so that I could send her to school.  Some days I only had enough food for her, nothing for me.

“I managed to keep her in school until she was 18.  She was smart and could have gone to college, but I could not afford to support her.  She was grown up now and I did not earn enough to feed both of us. I could not keep my promise any longer, and I found a man to marry her.

“The people from BRAC listened as I told my story, asking questions and writing things down in her notebook.  The next another person from BRAC came and asked some more questions.  When he was finished he told me that I could join a program that they had for Ultra Poor people.  He said they would give me some chickens or a cow to raise and I could receive training in how to care for them.  I told him that I didn’t want that.  I wanted bamboo.  If I had my own bamboo, then I could make things to sell to people who have money all the time.

“I joined the program.  They bought me some bamboo.  They also got me some chicks so I could raise chickens and have eggs.  They said I should have another way to make money in case there are times when I couldn’t sell bamboo products.  I can also use the chicken for meat and eggs to eat.  They gave me training in how to raise animals.

“I meet with a group once a week.  A person from BRAC, I call him my BRAC brother, teaches us about how to keep from getting sick, how to eat well, how to save money and other important things.  I know them all by heart now.

“My daughter and her husband live in the city and work in a garment business.  They have a daughter and they told me it is hard to raise a girl in the city.  So I told them to let Ruana live with me.  Every night I make sure Ruana finishes her school work.  I can help her some with her letters because BRAC taught me how to write my own name.

“I hope that someday I can earn enough money to buy my own land and build my own house on it.  I want Ruana to be able to get all the education she wants."

"Now, when I pray, I pray for BRAC and for the people who are as poor as I used to be.  I want them all to be able to get the same help that I have.”

BRAC’s approach has several advantages beyond finding the right participants.  They avoid the pressure of undue influence from powerful people by making the whole process transparent to everyone in the village.  Because the people in the village play a role in selecting the participants, they don’t complain about the wrong people participating.

With this approach, BRAC has been able to select 1.8 million participants for this program over the past 15 years, with more than 90% able to provide for their own livelihoods after two years.

A version of Mahmuda’s story first appeared on the website of RESULTS. Please go there if you want to learn more about how to use your voice and vote to help eradicate extreme poverty. 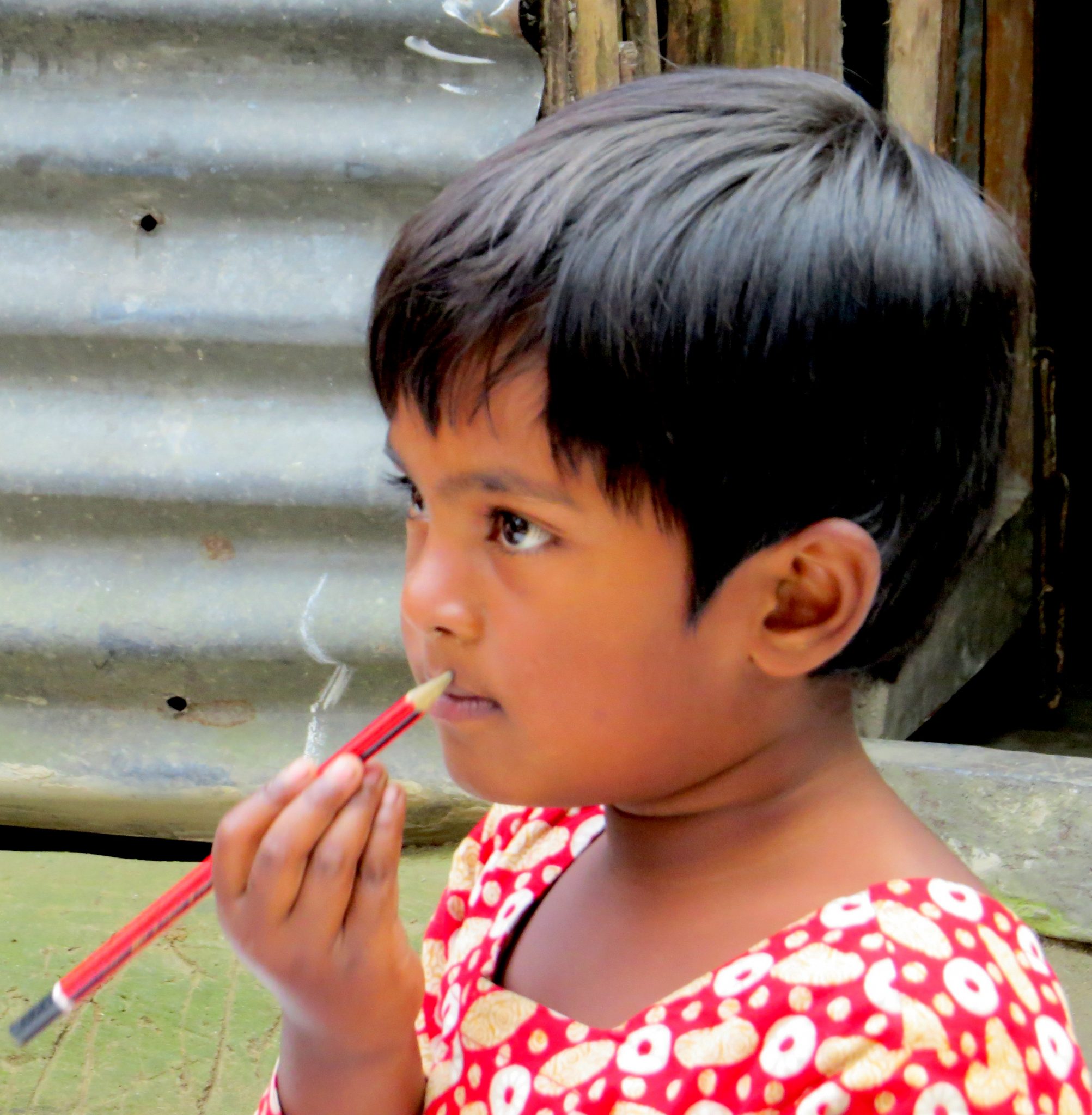